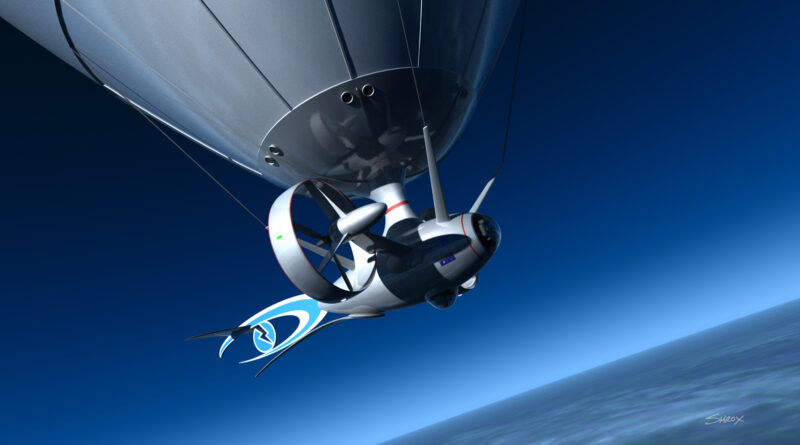 This is an early look at the design of our stratospheric airship. We call it a StratoDrone. Initially we thought it may be more “blimp” like, but it was soon clear that at an altitude of 16 km to 20 km the shape of the craft is insignificant in whether it moves well through the air. The air is very thin at those altitudes and if you want to know more, look up Laminar Flow. We have sacrificed good handling at lower altitudes for huge benefits at altitude. The best mass to lift ratio is found in a near spherical balloon. Of course that is not possible when building that as in simple terms the payload has to hang from the balloon rather than the weight being distributed evenly around the balloon. Even a well distributed balloon would compact from equal weight distribution, but hopefully I have given enough information above.

We are looking to test fly a model of this amazing machine in the near future. The top of the balloon is a fabric solar panel. The interior of the balloon is made up of several helium bladders making it a much safer machine in the case of a failure. It will come down, but slowly. The equipment pod is houses the charger and batteries to power the systems and motors at night. The guidance and radio links are also housed here. The units heading is controlled by the motors and the tail that can be flexed left and right as well as up and down.

The customer pod is gimballed to ensure that it stays level and pointed north south. The systems can be swapped out within a day. Using another StartoDrone, the new system can be taken to the same position and a different altitude. the system can be then switched over than the older one returned to the ground. AT a fraction of the price of satellite systems, these units are able to do more than one function.

ADS-B will be used to keep the StratoDrone safe and other aircraft safe. ADS-b is the new system for telling flight controllers and other aircraft your location. This will be particularly important as it launches and lands, traversing controlled air space. ADS-B is a new system in which electronic equipment onboard our StratoDrone automatically broadcasts the precise location of the StratoDrone via a digital data link. The data can be used by other aircraft and air traffic control to show our position and altitude on display screens without the need for radar.

A drone like this sent to a fire ground could have provided communications and camera surveillance of Australia’s recent fires. If equipped with high resolution cameras with zoom and and IR camera the system could manage up to 200 km radius. Add to this fire ground repeater coverage for full communications and the system is a huge leap over current operations. Future possibilities will the ability to know the position of every firefighter on the ground and every vehicle as well as their health and if they have collapsed.

The StratoDrone can travel at up to 90 kph air speed, 24 hours a day. with GPS hold and pre-course programming, it is envisaged that a small number of pilots can control a large number of drones on autopilot.

It would only need 40 of these units to cover Australian for mobile communications and data. Recent LTE systems from Ericsson were able to provide phone services over a 200 km range. LTE means Long Term Evolution and is in use with mobile phone services. With full Internet and phone coverage, the StratoDrone will revolutionise telecommunications. Unlike satellite coverage, there will be more power and less latency (delay).

Patrolling coastlines, oceans, checking farm health, floods, fire, erosion and a huge number of other activities makes the StratoDrone a natural choice for the future. A demonstration flight is possible in later 2020 / early 2021.